The FHHD Conference in Denmark – A very Brief Report and Pictures 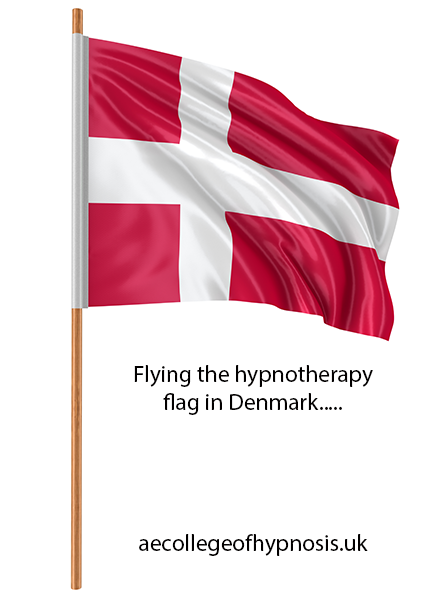 Last weekend I was lecturing in Denmark for the second time this year. For those of you that listened to my recent podcast episode featuring Mette Bergholt, you will have been aware of the new organisation that has been set up in Denmark (the FHHD) and how well they are doing – with an ethos of democracy, inclusion and further understanding of the field, they have created an organisation that has attracted a lot of interest and last weekend was their first annual convention.

I flew in to Denmark on Friday and was driven across the country by two very lovely ladies (thank you Tine and Michaela) and joining me was one of the other presenters Jorgen Rasmussen. I have known Jorgen a number of years, I am a big fan of his and it was lovely to speak with him, catch up and then have dinner at our hotel later that night.

We were up in time for a hearty breakfast before a wonderful seminar room was filled up with enthusiastic attendees.

Jorgen was presenting first, on the topic of his “Psychological Illusion” model which highlighted (among many other things) the illusory nature of life and our thinking. Having opened by including neuroscience quotes from David Eagleman and then moving onto discussion about how we forget that what is occurring in our heads is helped greatly by recognising we are the one thinking those thoughts and that they are not reality. I managed to grab a selfie with him before he began…. 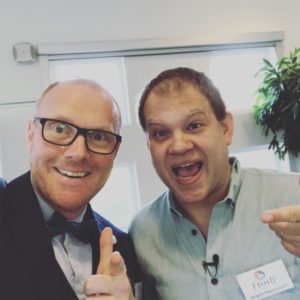 Jorgen is a brilliant story teller, and is often regarded by many as being provocative, so it should come as no surprise that his stories and illustrations of his points managed to terrify me as much as I found them hilarious. He demonstrated his approach with several volunteers and all responded well and reported back positively. I really enjoyed the entire presentation.

After lunch, up on the stage to present was Cal Banyan, a real titan of the hypnotherapy world and has been around even longer than I have – we both thought it was unusual that our paths had not crossed before this weekend. I used the tea break as an opportunity for a selfie with him… 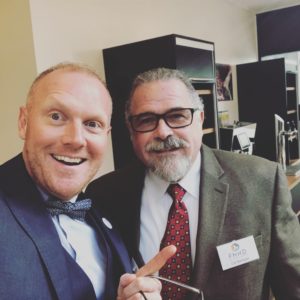 Cal spoke about using regression effectively as hypnotherapists, however he also offered up a lot of interesting information about his approach in general terms too. He referred to several of his induction processes, elements of his 5PATH methodology and how he explains it to his clients and students.

I particularly liked that he shook off the cliched notions of hypnotherapists speaking in slow, affected voices, and was upbeat and fast when speaking with clients, helping focus awareness and he used a metaphor of riding on a bike to do this – Cal is a biker who rides a Harley and I loved hearing him share that stuff along with some of his other history. He rang his bell as he famously does in his podcasts and his teaching tales were very entertaining and I laughed loudly. 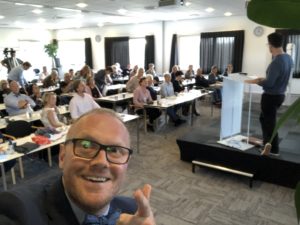 There was a quick change and then headed down to the restaurant for a lovely dinner and drinks. I managed a blurred selfie of my friend Mette at dinner, who was instrumental in the success of this event…. 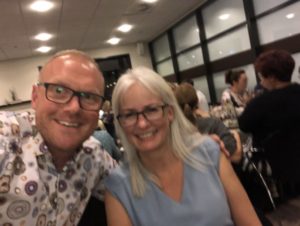 Much belly laughter ensued and various different shots were drunk, and before I knew it, it was the early hours and bed beckoned. I went to bed at around 3am, and James Brown was still up, still dazzling people with his magic skills and being a general people magnet…. Which made me laugh because he still had to deliver his presentation on the Sunday!

After breakfast, we had the panel session where all the weekend’s speakers were asked a number of questions and it stimulated some healthy debate and discussion. I enjoyed it and though there were some differences in opinion, it was very respectful and considerate. I promised everyone that I would strike a good pose for photographs…. 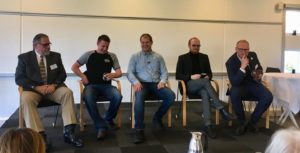 James then presented and shared skills relating to his POWA approach (Professional Opportunist Wrongless Approach) and showcased elements of his reality bending hypnosis skills and routine. I never tire of seeing the latter and there was a lot of laughter in class. James is one of my favourite hypnosis performers due to his tenacity, his humour and his slick presentation skills. He had people up on stage with an array of hypnotic phenomena being created, as usual….. 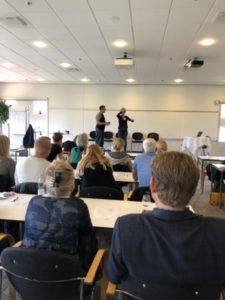 Before We knew it, it was all over, and we were driving back across Denmark to Copenhagen airport.

It was a fabulous event, I was delighted to have been a part of it. I am certain that if they continue in this way, this organisation will thrive and will continue to raise the standards of the hypnotherapy field in Denmark. Excuse this being so brief, I head off to the East coast to teach for a few days tomorrow and have not had time to give a detailed account that this event deserves. I have posted plenty of pictures on social media and will add a few more when I get a chance.