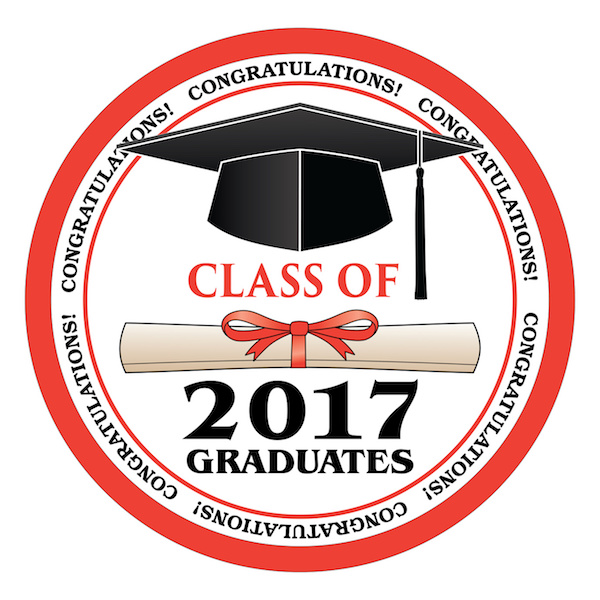 I think I have just about recovered and am back to the land of the living.

Each year, the start of July marks the official end of our academic year and we like to celebrate it in style. This year was no exception and this is my brief report.

This weekend that has just gone by was module ten of the current hypnotherapy practitioner diploma course that we run annually here at the college. Each year, I invite our graduates and friends to join us for the party we hold on the Saturday night and the lecture that I run following the afternoon tea break on Saturday.

The lecture is a different one each year and has featured some very academic and research based applications of hypnosis in the years gone by. This year was slightly different though. Here is how I described it in the promotional materials online:

I have very slightly sanitised my original Glastonbury music festival workshop and this is the first time I have ever presented it in a classroom setting. It will be fun and enjoyable, but will also have very useful and valuable applications and knowledge components.

Here is some of what you will learn in this lecture and presentation by Adam Eason:

– A range of exercises that use classic psychology and hypnosis to get high and elevate mood greatly.
– The theory and underpinning rationale of how to make the mind respond in pleasant, uplifting, psychoactive fashion to suggestion and thoughts.
– How to replicate and previous alcohol, adrenaline fuelled, or drug induced states in the absence of those stimuli.
– How the effects of music can amplify feelgood states.
– How certain body movements (imagined and real) effects physiology and bodily sensations.
– How to recreate belly laughter.
– How to trigger the release of feelgood chemicals and hormones in the body and how to light up the brain.
– Hypnosis has an impressive evidence base to support these applications and more. All exercises will have an underpinning research supported rationale or evidence based principles to support it.

This is going to be a lot of fun and you’ll get to apply everything to yourself and experiment, explore and discover a great deal about yourself if you wish too (I say “if you wish” because full experiential participation in everything is not obligatory – though will be incredibly worthwhile).

It is unlikely that this will be run again for a long time by me. I used to take big groups of party goers at Glastonbury festival into big dance tents following this workshop and they’d have incredible experiences using only the skills learned here. You won’t want to miss out on this, it is going to be quite unlike anything I have offered and taught before.

That was how I described it, but I don’t think it really described the full essence of what I wanted to deliver, which was a true taste of how you can use the mind to create a high using hypnosis, psychology and yes… Old school rave music!

Interestingly, in my earlier, very different teenaged and pre-university back-packing traveller life, I experimented greatly with a wide variety of recreational drugs and alcohol. One of the many reasons I stopped taking those kind of substances was that the ensuing hangovers and bouts of depression made my life miserable. What’s more, as I consumed more, the forced high created by the drugs decreased my ability to get high with the same amount of drugs thereafter (I kept needing to take greater amounts!) as well as inhibiting my ability to feel high and happy without drugs (as I said, it made me depressed on occasion and my ability to have fun plummeted).

Since then, over the years, there have been a number of things I have found to offer me ‘natural highs’ such as self-hypnosis, laughter, running, and even teaching – so I managed to practice and practice to enable myself to feel high on life as possible – and I think many people would be amazed by what kind of natural high we can create with the right kind of instruction, subsequent practice and some open-minded willing.

The beauty being that there are no adverse effects to a natural high. Drugs damage the reward centre of the brain by forcing the brain to release dopamine. The brain knows how to balance a natural high so that it does not damage the brain or impair our ability to recreate those highs – quite the contrary.

Some people may think this an odd application of hypnosis or even to read such from a therapist and teacher such as myself – yet therapists spend a great deal of time attempting to alter moods of people who are depressed, anxious or sad. Altering mood is partly what I was focusing on with this workshop. Though it was altering mood for a natural high.

Animal studies conducted as far back as the 1950’s (Olds and Milner, 1950; Hughes & Kosterlitz, 1974) proved that the brain produces its own internal opiates. Ongoing research showed that there are two key drivers of human pleasure – dopamine and endorphin.

Science has shown us that there is a neurochemical analogue for each mind-altering substance, such as recreational drugs; some of which can contribute to loss (temporary or permanent) of sanity, diminished well-being and greatly lowered productivity. Given that the brain is a giant pharmaceutical factory that manufactures its own mind-altering chemicals, the aim of this workshop was to show those in attendance how to use hypnosis to derive natural pleasure.

FOllowing my framing and explaining the stages of the presentation, our first group session combined hypnosis and the Stoic meditation of “the view from above” and I used mellow, uplifting, inspiring music and a number of dissociative suggestions to get the ball rolling. It was a more in depth version of this type of session: Using Hypnosis To Get Properly Spaced Out.

Following that, Let me introduce a fascinating author who I love… I posted, this picture on our social media output at lunchtime on Saturday… 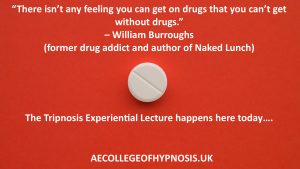 “There isn’t any feeling you can get on drugs that you can’t get without drugs.”
– William Burroughs (former drug addict and author of Naked Lunch)

The famous beat generation author and drug addict William Burroughs wrote greatly about drugs, mainly recreational drugs, but this quote is still very valid here. Many believe that his best work was done when he was clean and sober.

I interpret this quote though, as a means of highlighting the fact that we all have so much more within us that we simply do not take the time to access or learn about. If we explore, we learn that actually we can learn how to be active instead of passive. Most of the good feelings, comfort and well-being can be found within us. We can learn how to engage with our own mind and lower pain, reduce weight and ease stress. The world is awash with evidence to support such statements.

We designed our own hypnotic drugs, some people drawing upon former experiences, some creating new substances from scratch, all within what each person considered to be ethical and in a way that they were comfortable with. Equipped with the information from the preparation, using a blend of active alert hypnosis, different types of music, conditioned response and lots of laughter, motion and movement throughout, everyone consumed their hypnotic substances.

The third and final phase was to bring all of what we had learned so far into one climactic group hypnosis session. We did a number of preparatory exercises using specific language, breathing processes (including the ‘breath of fire’ technique), and some jumping up and down (you had to be there to understand!).

The final phase was loosely based upon this session, though was much more intense, had a variety of types of music, and was more sophisticated, delivered by me using hetero-hypnosis in the group format: Getting A Natural Hypnotic High – Maasai Style Self-Hypnosis!

Without me asking, over the half the class had their hands in the air and everyone had such big smiles on their faces, it was just lovely to see. The feedback I received from everyone in attendance that evening was extraordinary and surpassed all my aims for the presentation, it is tough to do it justic here, so I shall not attempt to do so. Class finished for the day.

A few of us then headed to the bar for early evening drinks. Which involved early tequila shots at the Marsham Court hotel bar! 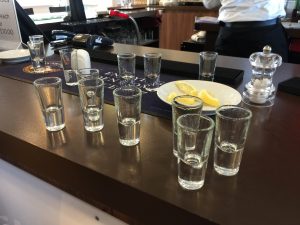 I then got changed in very rapid fashion, met with everyone else arriving in all their finery and we had dinner together…. and of course I got out my new selfie stick (those who know me know that my former beloved selfie stick expired at last year’s Christmas party)….. 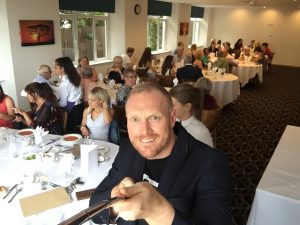 I think I retained enough coherence to get a few salient points across in my end of dinner speech. As well as thanking the course assistants for their support throughout the academic year and highlighting some of this year’s students, I mentioned that I appreciated anyone who chose to train with me and this college and who recognised the importance to the field of hypnotherapy about adherence to evidence base, critical thinking and challenging much of the ‘received wisdom’ it is shrouded in, being prepared to stand up to the proliferation of myth and misconception that gets perpetuated and study this field with a view to developing it and creating a heightened degree of credibility in our public perception.

Following that end of dinner speech, knowing how hard we had all worked for the past year in and out of class, the disco got underway and we all let our hair down. 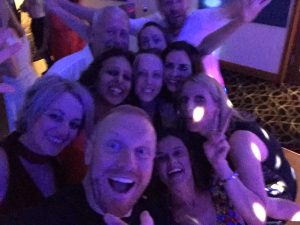 I have so many photos, but very few of them are fit for public consumption.

Despite the minor calf strain I had from a night of non-stop dancing and feeling like I had gin-flu the next day, class resumed first thing on Sunday morning and we still managed to get some quality learning done.

Certificates got handed out – here I am doing the official photograph with the very brilliant Sarah Mortimer, who I recommend as a truly brilliant and talented hypnotherapist: 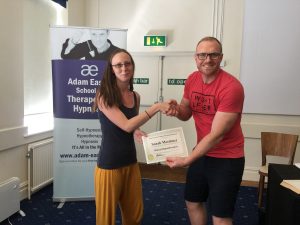 And then it was all over for another year. We all said our goodbyes and as it is every year, I felt sad that my time with this group in this diploma course format was over. I invest a lot of myself into each group each year and grow very fond of them and my time with them. It is an incredible journey and I know that not only will many of these people graduate and make the world a much better place as hypnotherapists, but our paths will cross lots more in the future at our annual events and within our community.

For me then, it starts all over again in October. I actually will not be back in the classroom until then, so I have an extended break this year. The diploma course, as happens every year, will get updated with the latest research developments prior to delivery in the next academic year, and I will rest, recuperate and have a thoroughly enjoyable Summer.

There’s so much more to write, but hopefully this gives you a little flavour of our end of year celebrations. School’s out for Summer!