Lecturing at the Royal Society of Medicine

Lecturing at the Royal Society of Medicine is something I was asked to do early this year and is something I’ve looked forward to for several months with excitement. It was a great honour to be able to share my research and my work with such a prestigious audience and especially because this annual David Waxman memorial event organised by the Hypnosis and Psychosomatic medicine section of the Royal Society of Medicine is one that is highly respected in the field.

David Waxman was a founding member of the section and the memorial lecture examines advances in the field each year. Additionally, it is attended by his surviving wife and children, all of whom were present this year and it was a great honour to meet them. David Waxman’s wife Shirley told me how proud he would have been of the event and was a thoroughly lovely lady.

As it happened, I very nearly did not make it to this event at all. Despite having boarded the train at Bournemouth station at 11.22am, due to arrive at Waterloo at 1.40pm or so, there was a fir outside of Waterloo station that morning. Yes, in sub-zero conditions, with continuous rain, there was a fire. An outdoor fire at that! This resulted in half of the platforms at Waterloo being closed. Having been on the train for 5 hours, we were eventually taken back to Clapham Junction, where we had to get to Victoria, then on to Oxford Circus and then hurtle my way through the streets with my suitcase (we had originally planned to check in to our hotel first) and burst through the doors of the Royal Society of Medicine with enough time to take my jacket off and walk straight into the lecture theatre and be presenting within minutes. Not ideal. Enough of that, what about the event? 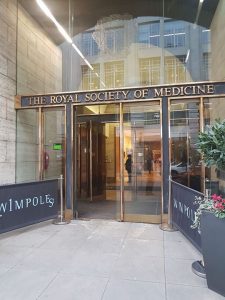 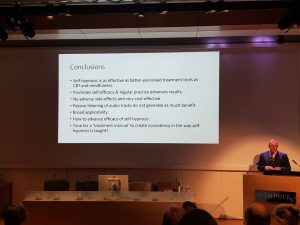 I offered up some potentially controversial points about omitting the use of hetero hypnosis as a precursor to self-hypnosis and argued that audio hypnosis tracks do not constitute self-hypnosis according to it being a self-regulated, self-directed skill, all of which generated a large number of questions for me during the panel later on.

The event was fully booked, the auditorium I was lecturing in was full and another room was also being used to send a live stream of the event to those who wished to attend. 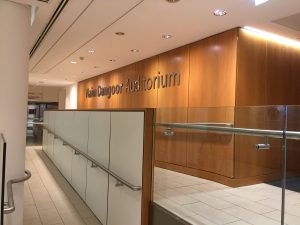 There was then a break for mulled wine, mince pies and I spoke with those who had pressing questions arising from my lecture and got some great feedback.

I then had a reserved front row seat for the final lecture delivered by Dr Ben Parris on advances in intrinsic hypnosis. I loved it. Ben offered up his own latest theory of hypnosis and the forms of control that occur in what parts of the brain during hypnosis, it was fascinating. At the end of the lecture, we all sat on the panel (all 3 speakers) chaired by RSM hypnosis and psychosomatic chairman Dr Raj Lal Sharma and the first question came from Dr Devin Terhune of Goldsmiths University London – he delivered the Waxman Memorial Lecture last year – and he offered up some data from some of his own recent research that supported and conflicted with some of Ben’s presentation; it was wonderful, to see debate by two of the most productive and impressive researchers and theoreticians in the hypnosis field currently. 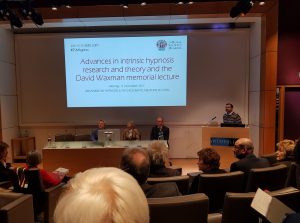 I actually seemed to get the most questions, and did my best to answer as thoroughly as I felt able – which also meant accepting that I was not qualified to give adequate answers to some of the questions (a couple of crazy ones – discussions for another time).

It ended over-time so many had to head off. For me though, it meant getting to the bar at the Royal Society of Medicine, which involved a great walk through the building, which is incredible and I loved it. From the bar, off to the private dining rooms for a great dinner and non-stop hypnosis debate, discussion wine drinking and belly laughter with world renowned oncologists, dentists, university professors, academics, hypnotherapists, and NHS health care practitioners of all kinds and it was wonderful.

Instead of much of the usual posturing that finds it’s way onto much of the frontline hypnotherapy world, there was no defensiveness – instead it was a climate where everyone could eagerly question each other, challenge each other and it was accepted and developed wonderfully into a useful conversation. For example, I spent some time in discussion with the Honorary Secretary of the RSM section, David Kraft a London based psychotherapist who is a strong advocate of psychoanalysis – he listened to my critique of that, and offered up a respectful rebuttal and we shared ideas on papers each other should read and he told me stories of his life growing up with a career psychotherapist of a father and how he had attended his first psychotherapy conference aged 8 because his father could not get a babysitter – it was lovely.

After dinner, I was pooped. We had a final drink in the bar and I got a taxi back to my hotel around the corner – the Grange Fitzrovia, which is fabulous and highly recommended by me. I had a view of the Post Office tower from my room, and before I knew it, I was fast asleep.

Left early in the morning and headed back home for the first of my children’s nativity plays at school….

I’ll be back at the Royal Society of Medicine in March 2018 lecturing on hypnosis in sports medicine, which you can read about here.

I will also be lecturing for the Royal Society of Medicine at Bournemouth University on their Masters programme in January which I am really looking forward to. All in all, it was a thoroughly enjoyable experience. I’m keeping this lanyard…. 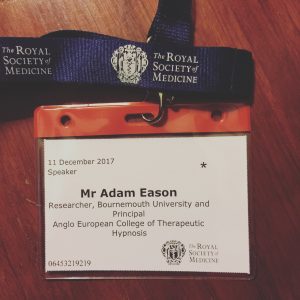 Have some of the themes here resonated with you? Then have a read of these pages:

Likewise, if you’d like to learn more about self-hypnosis, understand the evidence based principles of it from a scientific perspective and learn how to apply it to many areas of your life while having fun and in a safe environment and have the opportunity to test everything you learn, then come and join me for my one day seminar which does all that and more, have a read here: The Science of Self-Hypnosis Seminar.