Our Christmas Lectures and Party Rounding Off The Year Nicely: Brief Report 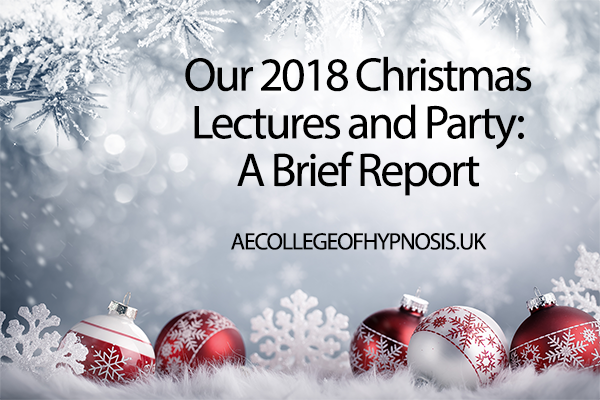 Last Wednesday evening we had our end of year celebration and it was a splendid way to round off an incredibly busy and enjoyable year here at the college.

The evening began with a couple of lectures. Both of our lecturers were people I had met during my PhD studies at Bournemouth University and managed to persuade to come and present here for a good cause.

First up with Alethea Guestini who presented her own research on the role of the prefrontal cortex in hypnotic and placebo analgesia. At the start of this presentation Alethea spoke of the neuroscience behind placebo and suggestion, and presented the evidence base about these topics. I love the fact that she cited a 2007 study by Amir Raz who referred to “hypnobo” (hypnotic placebo) which put a smile on my face for the rest of the presentation.

Having informed us of the role of the prefrontal cortex, she then proceeded to detail her own research (the methodology and shared a photo of her lab – I was thinking “I’ve been there and seen that”!) which had some fascinating findings – importantly, hypnotic analgesia outperformed placebo analgesia and the control group in her study and she also showed that patients who have prefrontal cortex lesions (such as those who have had a stroke or have dementia) are unlikely to benefit from placebo but may instead benefit from hypnosis.

It was a very enjoyable lecture and we then handed over to Dr Ben Parris, senior lecturer of Psychology at Bournemouth University and my PhD supervisor, who has been an important researcher and theoretician in hypnosis academia in recent years.

Ben talked us through his background the story of how he developed such an interest in hypnosis – he had conducted much research on the Stroop effect and kept on repeatedly trying to disprove that hypnosis could reduce it – without success. He has since conducted extensive research disproving his own thoughts that when engaged in hypnosis participants were just more motivated and expending more effort in order to do well in troop tasks. His studies using pupilometry showed that was not the case and that the hypnosis responses to troop task performance were genuinely something else.

This extensive range of studies led Ben to begin drawing upon a range of dominant hypnosis theories (which included and involved the simplest and best explanation of cold control theory I have ever encountered) and develop his own, which he laid out for us all, and involved some very stimulating thought processes. I loved every minute of it and could have listened to him talk all night, I was in heaven having my inner hypnosis geek needs met wonderfully.

Both lectures were greatly received, I had unanimously good feedback on the night and this continued into the past 24 hours with emails and comments online from those present. Heartiest of thanks to Alethea and Ben for sharing their work with us and captivating the hypnotherapists and students who attended.

This was our first Christmas event that had a charity element to it. The passing of my friend and graduate of my college Heather Clark, had led me to name our Christmas event “The Heather Clark Memorial Lectures” and all the proceeds from the event are going to the charity Ovacome. Heather supported this charity in her months while battling with ovarian cancer. Two close friends of Heathers, Helen and Debbie travelled from Yorkshire to come and be with us and gave a tribute and shared a poem with us that was read at Heather’s funeral. They also organised for me to have a copy of a video that was played at her funeral and her charity event earlier this year. It does a better job than I can with regards to giving you insight into Heather and her life, and I was given permission to share it here with you also…..

Having mopped my eyes, taken a few deep breaths and then pledged to raise a glass to Heather later that evening, we had our drinks reception and got embroiled in wonderful discussions and debates about the evenings lectures and many of us headed in for Christmas Carvery dinner and drinks….

Once the christmas pudding had been finished off, the disco struck up, our conversations stopped being quite so meaningful, and we danced, played and had lots of fun.

We stayed up drinking and talking for a while, but mainly laughing and those of us staying at the hotel had breakfast together, moaned about our headaches while laughing and all in all, we rounded off the event in style.

It was a wonderful event, I loved every minute of it – thank you to everyone who came and was part of it. Our hypnosis gang get togethers are always good times, but this one will stand out for me for many years to come.