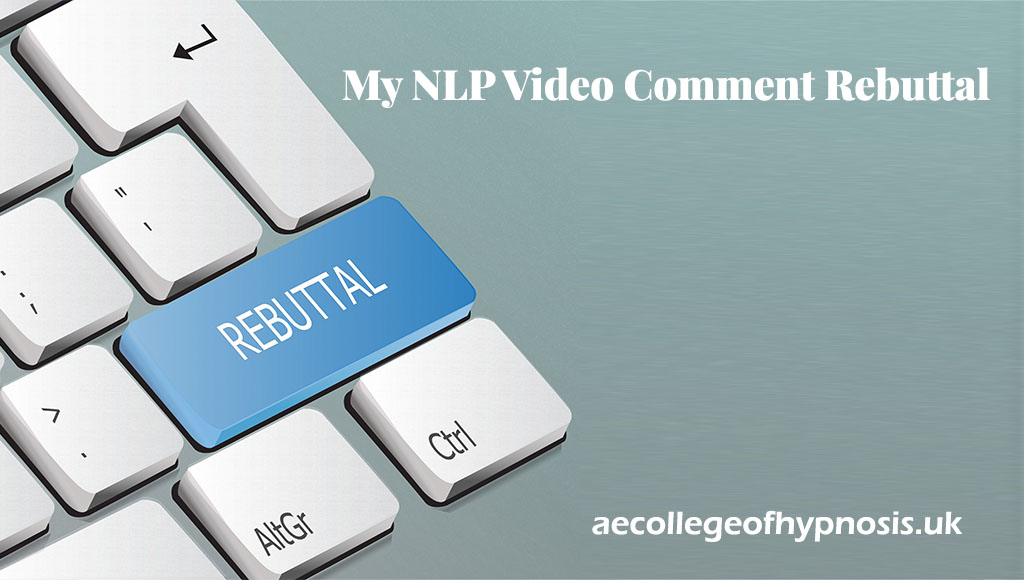 Earlier this year, I recorded a video entitled “Is NLP Scientific? The British Psychological Society Don’t Think So”  – It was referring to an article that I shared and discussed on my blog a few years ago that featured on the research digest blog of the British Psychological Society (BPS) entitled “10 of The Most Widely Believed Myths in Psychology” and it offers plenty of evidence base that refutes commonly held beliefs in the field of psychology. One of the myths in that BPS article was: Neurolinguistic Programming is scientific, and that article stated “A forensic trawl through all the claims made in NLP programmes found that the overwhelming majority are piffle.”

In the video, I discussed this and the reactions I have had from well-known NLP proponents over the years and shared my thoughts, responses and rebuttals.

A month after I published it and shared it, I had someone comment on my college blog, it is public and still there, and said the following:
“Yet another example of an establishment using a straw-man argument to attempt to defeat something they view as a threat or outside their scope to control or monetise!As you say, I’m not aware of any claims by B&G as to the science or evidence of NLP, yet it is now being stood up as such.

This logically-fallacious approach opens up the call for RCT’s that effectively set out to prove/disprove the efficacy of NLP and as we all know, scientific appriach has been used throughout history to prove/disprove all manner of things from how a bumblebee flies to the ‘magic bullet’ that killed JFK.

I consider NLP to be more of an art; a realtionship between artist and audience.

Maybe we should all go back tell all the thousands of people that NLP has helped down the years that they are in fact still broken and the happy, successful lives they received in return for their investment in NLP therapies was all a waste of money!

RCT’s for therapy only prove/disprove that on that particular day, with that particular subject and practitioner – using that specific approach or methodology – this particular result was observed & recorded.

That’s not to say that RCT’s & science-based study to prove the efficacy of NLP, hypnosis or whatever are invalid – far from it.In a world that is dominated and controlled by self-appointed autocratic bodies we have to play by their rules.

I’m fascinated by the work done in this field by you and others, Adam; we need you and we need your findings!But as Robert Anton Wilson said:‘What the thinker thinks, the prover proves’
— Comment ends.

This video gives my detailed response to this comment and highlights the issues I have with it. I also make reference to another video of mine The “As Long As It Works” Attitude.

I hope you find it useful and stimulating, enjoy.